With the imposing Alhambra bearing down on it, it’s easy to stroll past this old piece of Granada’s history with barely a glance. Nestled among the tall plane, horse chestnut and maple trees that cascade down the hill the Alhambra was built upon – Sabika – on first sight the arched gateway looks like a Victorian folly. Its style, though, means only one thing: Moorish and in particular from the Nasrid dynasty of Granada (1238–1492).

But why is it here, alone, surrounded by trees and privet hedges planted from the 16th century? Because it hasn’t always been here; it was once two kilometres away on, what is now, Plaza de Bib-Rambla in the heart of the city. 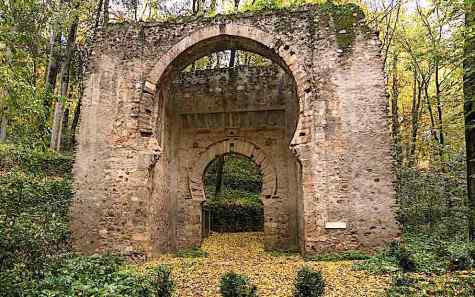 Now with just the sound of birdsong and myriad irrigation sprayers keeping the woods lush, this pile of stones once heard the chatter of medieval shoppers trading goods.

Anyone who’s visited Granada will probably have set foot in Plaza de Bib-Rambla; home to restaurants and tourists shops selling trinkets. It’s the square with a central – and somewhat odd – fountain at its heart.

The gateway – built in the 11th or 12th century – originally stood as an entrance in the walls that surrounded the city. It led to an area at the end of what is now Calle Arco de las Orejas (location here) and was the only entrance until the 19th century. Centuries ago it was a souk, plump with produce – from fishmongers and butchers – and goods, including silk. The main mosque (now Iglesia del Sagrario) was nearby.

The gateway was known by several names: Bab al-Ramla, Bibarrambla and now Bib–Rambla – Bab or Bib (gate/door) and Rambla (sandy area). As the shores of the Río Darro once ran past what is now the edge of the plaza, that would make sense (the river is now partly covered and runs beneath nearby Calle Reyes Católicos).

Other names included Puerta de Arenal and Arco de las Orejas (Arch of the Ears) because criminals’ body parts were hung from it.

After the Christian conquest the plaza was used for fiestas, horse racing and bullfighting – and marks the spot where, in 1499, generations of Arabic wisdom – around 5000 books and manuscripts – went up in flames at the behest of Cardenal Ximénez de Cisneros, Archbishop of Toledo and head of the Spanish Inquisition.

There was another small entrance – like a porthole in the wall – called Arco de las Cucharas (Arch of Spoons) where the wooden utensil, used by the poor, was sold.

Like many cities over time, Granada succumbed to a remodeling project – especially around what is now the plaza. The gateway – considered ugly and not in keeping with the planned ‘improvements’ to the city – was eventually dismantled in 1884 after ten years’ debate about its future.

The gateway had been made a National Historic-Artistic Monument back in 1873 but clearly some people got their way, claiming it was also a ‘health and safety hazard’. However, many of the gateway’s stones were buried in the courtyard of the Museo Arqueológico de Granada. For that at least, we should be grateful.

The Moorish jewels of the city – the Alhambra and various historic houses remained – but other buildings and structures did not. In short, Granada’s ‘everyday’ Moorish past was being eliminated. 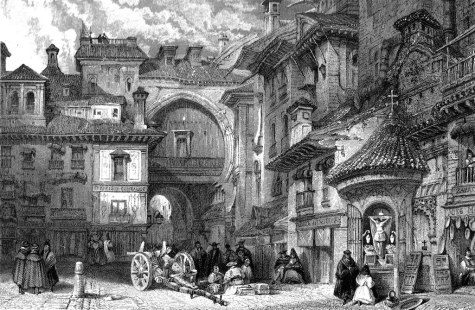 The gate c.1830 by David Roberts [click to enlarge] 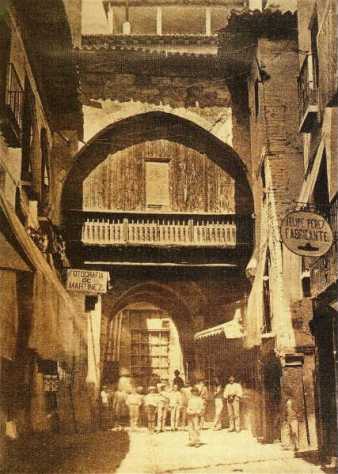 In 1933 the pieces were dusted down and reconstructed in the woods following an initial idea from Manuel Gómez Moreno el Joven (1870-1979). An architect – Leopoldo Torres Balbás (1888-1960) – was responsible for the project.

During street renovation work in 2016 near Plaza de Bib-Rambla, parts of the old walls and foundations that joined the gateway were exposed on Calle Arco de las Orejas. This enabled experts to locate the gateway’s exact location. Today, a section of the ancient structure can be seen behind glass.

Some people over the years have campaigned for it to be rebuilt in Plaza de Bib-Rambla. However, over the summer of 2020 around 100,000€ was spent on renovating the ‘ruin’ where it has stood for almost 100 years on the Cuesta de Gomérez. So a homecoming is not going to happen anytime soon.

It’s a small victory that any of it remains at all – so in a way, it has become Granada’s ‘Triumphal Arch’; stared at by tourists, unsure of what it is and why it’s there.

The 2020 video below (in Spanish and featuring a young Brian Blessed) is fascinating and shows several depictions of the gate, plus the recent discoveries about its construction and location.

[If you receive this via email, please visit the blog for a better experience.]