It’s taken a few years, but we finally managed a trip to Córdoba in February. A city that was once the second largest in Europe, where Muslims, Jews and Christians lived in relative harmony and education and learning flourished. Despite our love for Granada, it was a thrill to be heading to another of Andalucía’s great cities for the first time.

The stunning approach from the south took us through undulating hills studded with olive trees as far as the eye could see. This was real Spain without a building in sight and colours so vivid they could be from a child’s book about some magical land. The part of Andalucía of scorching, dry summers, and winters that pass in the blink of an eye.

As the olive trees disappeared and newly-ploughed farming land surrounded us, we entered Córdoba via Puente de San Rafael with its ancient city walls unfurling along the river bank. In an instant we knew this was a special city with history oozing from the cracks of Moorish arches. There were cobbled streets, buildings the colour of honey, glistening green-tiled rooftops, fountains, narrow streets, riders on horseback – it was all here. And, of course, the Mezquita-Catedral de Córdoba, the city’s equivilant to Granada’s Alhambra. [Note: click on pictures to enlarge.]

Woken by the sound of someone’s never-ending wee (a man hosing down the entrance to our hotel) we headed to the nearest bar for a café con leche. By mid-morning tourists with stomachs heavy with breakfast spilled onto the streets in search of one of the famous patios. Each May, these flower-packed courtyards enter a competition. We visited one which had a limonero growing out of an old well, plump lemons drooping in the warming sun as we wondered: ‘can it get more beautiful by May?´ Roman artefacts were on show – they pitched up here in 152 BC, not that they did anything for us. 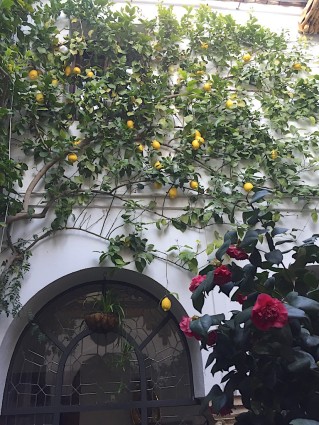 A morning spent getting lost in the maze of streets in the old Jewish quarter led us to Bodega Guzmán – a shrine to bullfighting. Old men hung around in the shady interior; chess pieces, occasionaly moving from one table to another. Walls were bursting with photos of matadors. They are long-gone like the bulls – with hearts of sickening fear – they slaughtered. It’s hard for us blow-ins to understand why it continues. 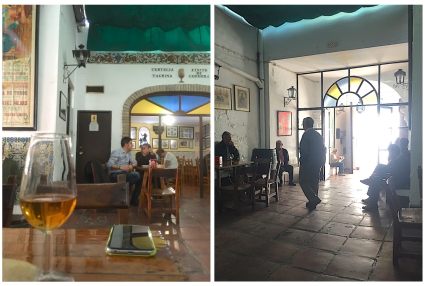 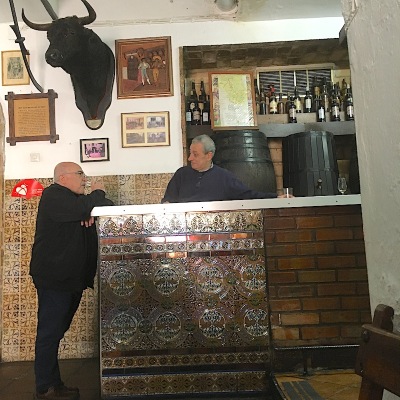 Framed posters – kept away from decades of sunlight – had kept their rich colours. At three metres long, they hung like castle pennants with enough words to fill a chapter of a book. To think of all the post-bullfight celebrations and the drunken eyes that had stared at them and the vast barrels that have dispensed a million glasses of the ‘local’ stuff.

Montilla-Moriles is a region east of the more famous Jerez, which produces a drink similar to sherry but made with Pedro Ximénez grapes (among other varieties) instead of Palomino. It’s made in a similar way to sherry but doesn’t get fortified to increase the alcohol content. We tried a glass or two of a type similar to amontillado (which means ‘in the style of Montilla’). We planned to visit the village of Moriles outside Córdoba, but never made it.

As more people arrived the chat and laughter became louder. Plates clattered, the staff notched up a gear and smells from the kitchen drifted, like unseen fog, to far corners of the bar. It was happening in thousands of places around Spain; one of the most important times of the day to be enjoyed with family and friends before, for some, the great slowdown and nap in one of the surrounding apartments. When walking around the white-washed backstreets of cities like this people’s homes, often with open windows, seem like mausoleums; interiors as black as ink. The only sign of life may be the sound of a distant TV, children’s laughter or the aroma of fried garlic and peppers.

And being Spain, food is never far from one’s thoughts: anchovies in vinegar, olives the size of your thumb; creamy mushroom croquetas; rice with bits in that, even in this inland city, tasted of the sea; salty, paprika-rich chorizo – and prawns sizzling in olive oil from the trees we passed on the way. (The prices for a tapa ranged from €1.95 to €2.25.)

Córdoba’s famous dish – (cold) salmorejo – is everywhere. They even put the recipe on tiles around the city: tomato, bread, olive oil, garlic and salt – normally served with some small pieces of jamón and egg.

Oxtail braised in red wine (sometimes sherry) is another speciality. Bulls’ meat has never been hard to find, and the tail (rabo de toro) – proudly cut off by the matador and held high – found its way into a celebratory dish, not unlike Beef Bourguignon. One place to try it, we’re told, is Taberna Salinas in the old quarter of the city. It was founded in 1924, although the site been a place to eat and drink since 1879 – the same year the Spanish Socialist Workers’ Party (Partido Socialista Obrero Español – PSOE) was born in a Madrid bar. 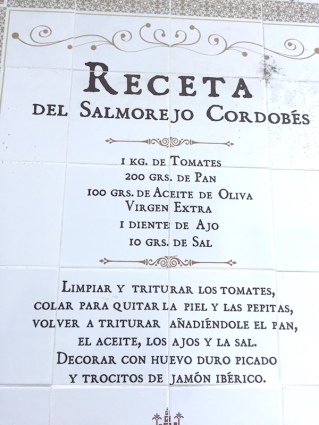 Salmorejo recipe – on tiles in Córdoba 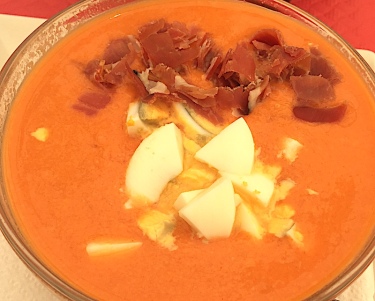 As Córdoba is a relatively small city, it’s easy to get a feel for the place in two or three days. The Alcázar de los Reyes Cristianos (‘Castle of the Christian Monarchs’) and gardens – which we at first thought were a cryptic maze of streets away – were just a three-minutes walk from our hotel. It’s a lovely spot to soak up the sun, admire the gardens and hear the constant trickle of water.

This blog has never been about history in any depth, we tinker around the edges and leave others, way more knowledgeable, to write about it. But Córdoba did play an important role around the time of the Christians finally conquering the Moors in Spain in the late 15th century.

The reconquista didn’t happen overnight; it was spread out over centuries and began almost as soon as the Moors arrived on the Iberian peninsula in 711; multiple bun-fights occured over centuries. 1492 is the date many people know as the year that the Moors’ tenure in Spain – in Granada to be precise – finally ended. But Córdoba had been recaptured 250 years earlier, in 1236. The Alcázar was built on top of both Visigoth and Moorish castles (more on Wikipedia, opens in new window).

It was from Córdoba – where the royal court had moved to from Seville, and where Queen Isabel I and King Ferdinand II lived for 8 years in the Alcázar – that the military campaign against the Moorish kingdom of Granada was plotted.

Just after the fall of Granada, the Alcázar was the location that los Reyes Católicos – Isabel and Ferdinand – finally agreed to (and partly finance) Columbus’s request to fill his ship full of nice things and head off on his travels. Columbus had already spent years trying to get sponsorship for his expedition from Italy (he was Italian, afterall) as well as England and Portugal.

If you get the chance to visit, do so. We went just after opening and had the place to ourselves. What a thrill to be (perhaps) standing on the spot where Isabel and Ferdinand gave the nod to Columbus. The place has its fair share of dark shadows too, it was the period of the Spanish Inquisition. 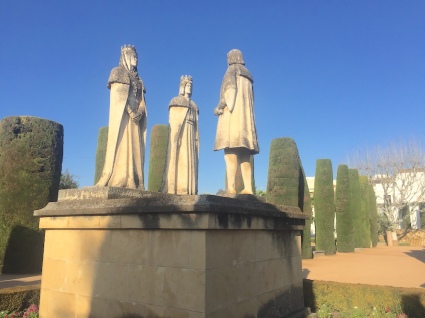 Columbus with the Catholic monarchs 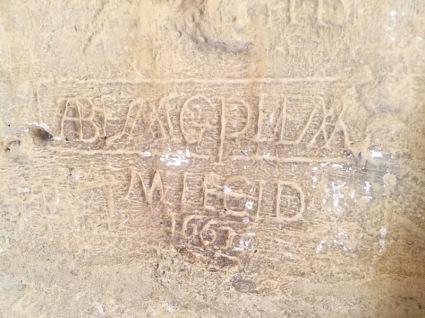 It would be a surprise if a visitor to Córdoba didn’t walk at least once across its two main bridges that span the Guadalquivir River – and in particular the Roman one. For 2,000 years it existed alone until the Puente de San Rafael was built in the 20th century. Nearby, the Molino de la Albolafia – a water mill built by the Moors, remains intact but unloved. Water from the mill once irrigated the gardens of the Alcázar but now it’s just home to a colony of cats.

At the end of the bridge the Torre De Calahorra (the ‘Tower of Calahorra’ – can you see where the name Torremolinos comes from? (two clues above) houses the Museo Vivo de al-andalus. It’s a fascinating collection about everyday life in Andalucía over the centuries. It has audio guides in English and is a great way to spend an hour or so. The views from the tower are splendid. (Website, in Spanish, here.) The tourist office, at the other end of the bridge, is very good too.

Córdoba’s Roman bridge – with the Mezquita in the distance

As ever with city breaks, getting up early is always recommended – it’s cooler, there are less people around and it’s quieter. The Mezquita-Catedral (Wiki entry here) is free to visit between 8.30am and 9.30am. It’s one of the few places on entry we have exclaimed ‘wow’ – it truly takes your breath away. After, you can climb the magnificent bell tower for just 2€.

In short: it’s believed a visigoth church stood on the site, then, following the Moors arrival on the penisula in 711, Abd al-Rahman I ordered that a mosque be built in 784 from when it grew over the centuries – including from 1236 when the Christians took over the city and decided to dump a vast church nave on top. So it’s a mad mix of styles and quite overwhelming. If you do arrive early, the sun pierces through small windows to the east. It’s where Muslims previously prayed towards Mecca. Today, it’s just a gaggle of tourists taking photos, with today’s Muslims banned from sharing the place for prayer.

Yes, we had to include a photo – note how few people are in it.

So, three days to dip our toes in the water of this great city; a second and third visit at some point will allow us to see more of the other sites – the arab baths, the synagogues, markets and, oh, one of the best kebab places we’ve ever been to.

[This visit was before the devil wrapped its arms around the world.]

One thought on “First time in Córdoba (part 1)”