Unsurprisingly, La Alpujarra attracts Andalucian tourist board and documentary film makers extolling its beauty. Aside from 1971’s ‘The Last Run’ (Fuga Sin Fin), we’re unsure what ‘proper’ films have been made in this area except, that is, Sunburn (2018) – a thriller/horror filmed in, and around, Bubión in 2016.

We were hoping to write a post about its arrival – with perhaps a cinema-ready trailer and a report of the launch party we would obviously have been invited to (types of canapés eaten, famous people we bumped into etc) but have waited for so long now we’ve given up. We believe it still hasn’t been released which, when it does happen, will be in the US (although it was shown at a British Film Institute event in London last summer). 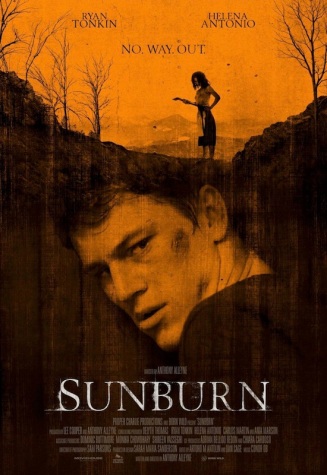 The film’s summary on IMDb states:

‘During the hot, sweltering summer, Mike, a young American tourist goes looking for his missing friend in an isolated Spanish village. Here, he gets embroiled with an alluring local woman who soon becomes obsessed with him. Forced to escape, Mike soon finds that the horror is far greater than he could have ever imagined.’

The film is set in the imaginary village of ‘Angustias’ (actually Bubión) and, from what we can tell, perfectly captures the broiling sun, parched landscape and the often empty streets of an Alpujarran village. Yes, perhaps even a little eerie at times.

While the crew of 25 stayed in the village we tried to speak to the director Anthony Alleyne but, understandably, he was very busy, no doubt working to tight timescales. We did, however, pop up to snoop on any filming. Whenever more than two people are spotted together in this sleepy place, you know something must be going on. And so it was, a gaggle of crew with lighting rigs and cameras crammed into a narrow street.

A bossy crew member asked us to ‘move on’ as they prepared to shoot (we were apparently lurking in-shot, albeit from a distance). We quite liked the idea of being in the film, afterall, we are both pretty horrific looking. Perhaps it was our green Covirán shopping bags overflowing with cat food, drain unblocker and beer that put them off. We felt like reminding them they had come to our backyard!

If you know the village you may recognise it in the teaser clip below, especially the mountain views and the bar interior. Cute – and strangely empty – Granada airport makes an appearance at the start.

Keep an eye out for it when the film arrives and reminisce about your time wandering Bubión’s backstreets without fear of meeting someone brandishing a large axe.

[Reading this post in an email? Visit conjamonspain.com for a better experience!]