To dye for – cochineal (a prickly tale)

Life is – in the countryside here in Andalucía – never having to say you’re sorry…for killing things. Huge ants build empires under the lawn, wild boar trash the place, processionary caterpillars cause a risk to animals; they need a tough talking to now and again, lest they take over one’s entire house and garden. The muffled ‘pops’ of a shotgun ping-ponging across the valley is a common sound, another boar slain.

The latest on the list is dactylopius coccus, a tiny scale insect – the cochineal bug – which uses prickly pears as its host, sucking away on the juice, decimating the plant. We noticed whole plants, metres high, covered in dots of white fluff. Ours aren’t affected too badly but action was needed. Who knows, we may still lose them.

Prickly pears (Opuntia species) are beautiful, gigantic, other-worldly almost. You need to keep your distance – their tiny spines get into your skin so easily if touched. We recently found a man collecting our fruit unannounced and seemingly unbothered he was helping himself. We don’t mind as we’re unlikely to collect them ourselves. They get skinned and the fruit, which looks a bit like mango, is sold in plastic bags in cities like Granada. 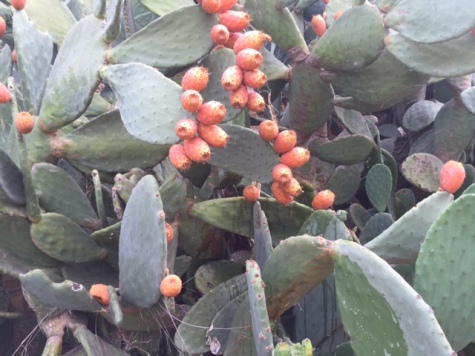 The cotton-like webs are to protect the bug from the sun; when smeared, the famous crimson colour appears. Imagine crushing a blackcurrant hiding in a soft, fluffy merangue. The insect produces carminic acid to protect itself against predators and this is the eventual red dye.

We donned gloves and coats on a hot morning to protect ourselves from the spikes. A mop and bucket of diluted washing-up liquid was the weapon as the white clusters were smudged and smeared like the Joker’s smile. Once the webs are broken, the sun and heat do their work. After several blood-red buckets of water were chucked away, we thought this is what mopping out the shower at the Bates Motel must have been like. 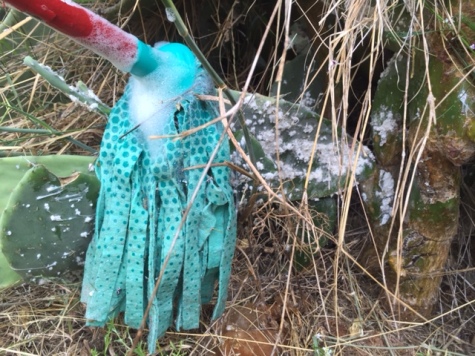 Cochineal – like gold, which is what the Spanish were after when they pitched up in Mexico – is valuable. Upon arrival in the early 1500s, they noticed many people wearing red, which didn’t fade when washed. The world’s most important, natural dye was no longer a secret and Spain and its colonies controlled its production for centuries afterwards. That’s why there are prickly pears in Spain and the British Army’s Redcoats had such bright uniforms (they did a deal with the Spanish). We’ve even heard that the coats of the Yeoman Warders (‘Beefeaters’) at the Tower of London, must traditionally still be made using cochineal.

The Spanish, and the rest of the world, were late to show however – the use of cochineal as a textile dye in Peru and Mexico dates back almost 3,000 years.

Today, cochineals are harvested mainly in Peru, Canary Islands, Mexico and Chile on plantations of prickly pears. The female insects (about 90 days old) are sun-dried, crushed, and added to solutions (normally alcohol or ammonia) to produce the extract. It takes between 70,000 to 100,000 insects to make one kilogram of cochineal dye, which is why its use in clothing has diminished, being replaced by synthetic dyes. However, today it pops up in products ranging from yogurts to lipstick, jams to booze (look out for carmine of cochineal on the label).

It was odd getting rid of something held in such high demand once upon a time. But we really haven’t got time to harvest the critters – and we’d like to still have our prickly pears to admire. Time will tell if we can.