All posts, Nature, walks and wildlife, Stuff we find

We recently noticed white ‘clouds’ in our pine trees – like blobs of candy floss abandoned high up in the branches. We discovered they were the silk nests of processionary caterpillars.

Should you touch one – or a dog or cat step on one – it can be very unpleasant and even fatal to animals, especially if they begin to lick their paws after coming into contact with them. With our clan of cats and the neighbours’ dogs who occasionally come to say hello, we took no chances and got rid of them today.

Thaumetopoea pityocampa is a moth whose caterpillar larvae defend themselves with a furry armour of irritating, harpoon-like hairs. These contain a highly-allergenic protein which in humans can cause reactions ranging from itching to anaphylactic shock.

Its life cycle begins in August when the moth lays up to 300 eggs on pine needles. In winter, even in cold temperatures, they leave their nest at night to feed. During the day in the sunshine, the nests are warmed helping them metabolise the food they collect during their nightly excursions.

Come March, the caterpillars leave their nest marching in a line (hence processionary) in search of a place where they can bury themselves underground. There they spin cocoons and metamorphose into moths in August, and the cycle begins again. 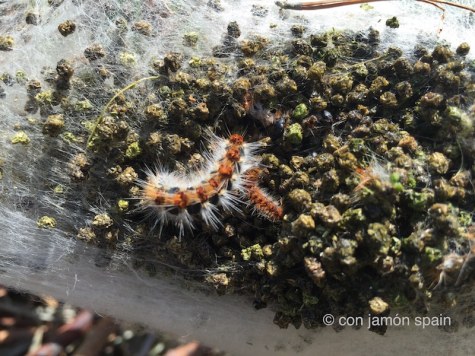 The French entomologist and author, Jean-Henri Fabre, who died 100 years ago, studied the species and carried out an experiment in 1896. Using a plant pot, he placed an unbroken ring of caterpillars on its edge near to food. The caterpillars circled the pot edge for seven days (and around 335 times), not once deviating from their progression. Eventually exhausted and, of course, hungry, they gradually dispersed.

Here’s a short film somebody else made of them doing the conga.

You can read Fabre’s wordy, but poetic, explanation of processionary caterpillars here.

A mole cricket turns up

Something wiggly this way comes

All about Granada, Órgiva, La Alpujarras, Las Alpujarras, Andalucia, Spain – tapas, history, local guides and more.
View all posts by con jamón spain »
« A cycle across the rooftops – in Gran Canaria
The junk yard outside Granada »