All posts, On leaving home, Travel

A visit to a past life

Sure, it’s not like we’ve been away that long, and little changes, right? Yes, pretty much, apart from London’s desire to build and build – bonkers City blocks and rabbit hutch flats further out. Even the jars of passata at the Italian deli were in exactly the same position, just new photos of the owners’s recent offspring pinned to the wall.

One of us recently swapped purring cats under the oleander for a visit to an English island and, later, the clatter of central London where each turn is a re-run of a familiar film.

Socks were reluctantly worn for the first time in months, but accompanied by the joy of obtaining a certain brand of dental floss from Boots the chemist.

But first, an island that time forgot.

The train from Waterloo (alas, no sunset) proved the perfect viewing gallery to glimpse the subtle changes to the Thames, west of its famous bridge. The chimneys of Battersea Power Station seemed shorter for starters and the MI6 building, blown up in the previous Bond film, was back to normal.

Towns and villages – most sprawling and dire, but some – with their red-bricked cottages, ponds and neighbouring flooded fields – flashed by. In no time the harbour arrived, the embarkation point supported by steel poles sunk into the sand near to where a grandfather once swam daily across the water to keep fit. It was time to depart the mainland for an anniversary. A sad, unwanted one.

Kicking the shins of a fond friend hoping they’ll arrive in the modern world is probably a waste of time and so it proves with the island. As one gets older this supposed ‘charm’ wears thinner when, in 2015, it’s nigh on impossible to get a decent coffee or wi-fi. But the island’s timeless draw – shimmering shores with anchored boats, local crab and pitch-black walks along the beach – remains undiminished. Plus the thought that Jimi Hendrix and Joni Mitchell made a few people smile all those years ago. Just like then, today’s island kids down all sorts of rubbish while believing all music began in 2005, rather than 1970.

The hike up Union Street confirmed the earlier belief that the island is stuck in, well, 1970. Apart from catching up with family, the highlight was a trip to a Tardis-like secondhand bookshop. Four volumes were bound up and put on the next plane to Spain, along with several bars of chemical-free, seemingly edible but meat-free Lush soap for the other half. 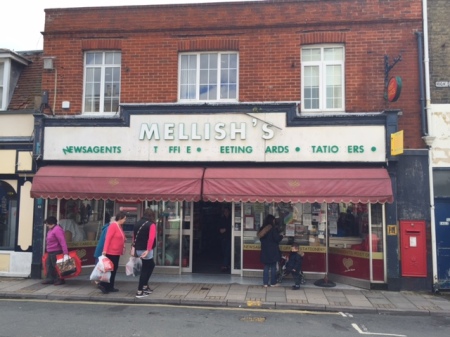 Next morning a walk out of the village along an ancient road flanked by ivy and brambles led to the church. A woman in Wellington boots told how she had volunteered to clear the graveyard of weeds – a two-year job initially undertaken with her late husband now lying beneath her feet – and how, tired one day, she sat on a hidden and broken, lichen-covered tomb only to discover it was her great, great grandfather´s place of rest. It was repaired and now stands proud with its intricate stone carving of oak leaves and acorns, draped in Autumn’s reddening berries.

Then, with just crows for company, a visit to a much-missed person where one stood quietly reflecting on what she never saw – a marriage and more – wondering what she would have thought of it all (the paradox of a nonbelief in an afterlife but a conversation with them all the same). And the hundreds of days that have since passed, not one where another hasn’t thought about them and wishing they were here to help blow away the rain clouds that gather above the village, or drink tea at four on the dot.

Back in the Smoke – all that life can afford

Leaving a village on the outskirts of the city – the dark coloured heathland, rallying point of a peasants’ revolt in 1381 and birthplace of England’s oldest rugby club – the journey into London seemed like yesterday’s memory. In fact, it was as if a complete week from one’s past had been lifted and plonked into the present.

The train rumbled passed the derelict Peek Freans biscuit factory towards London Bridge where, in the 1970s, a sweet smell (possible a Golden Puff or Bourbon) filled carriages in direct conflict with fag smoke and stale vomit. The car dump – the ‘M1 on a foggy night‘ as a friend once joked as we headed to a theatre to perform Oliver! – is long gone and replaced, as much of this part of south London is, with flats. The vehicular mass of metal was always the unofficial welcome to central London; the excitement rising as Tower Bridge appeared in the distance. It’s a feeling that has never faded.

The cloudbusting Shard, street markets around the South Bank, the magical views towards the city and Palace of Westminster – and the million memories of a great city – all retraced in three days. And as long as a certain brand of minced chilli could be found in Chinatown, all would be fine.

And so it was. A £400 Hemingway first edition was admired in a Cecil Court bookshop near Trafalgar Square before an array of glazed Peking ducks, like toffee apples for bears, appeared around the corner on Gerrard Street. It was comforting to know that the ban on entering one particular shop on Lisle Street (for tickling live eels in a tank) had been lifted after many years.

But Soho has never been about eating, but rather drinking (OK, other things too) and if one were never to return, it’s good to know at least the French House would be the last place to have witnessed London’s intriguing and tattered underbelly; where people talk rubbish for hours and people ‘pop in for a quick one’, as they have done every day since 1958. The rule banning mobiles ‘in the interests of good conversation and serious drinking‘ remains chalked behind the bar as does, on another wall, the transcript of General Charles de Gaulle’s A tout les Français; for this is allegedly where he wrote the speech after the fall of France in World War II. (Dylan Thomas once left his manuscript of Under Milk Wood in the bar.)

Walking up Charing Cross Road, tourists’ conversations in Spanish, which once would have sounded gibberish were partly understood (turn left past that sex shop, then right at the next one and it’s there). As well as a curious influx of novelty sweet shops (did Willy Wonka visit recently?), several new Spanish places selling expensive jamón serrano, were spotted. Old Compton Street stalwart, Cafe España, 32 years and still going strong, was now near-neighbours with a more flashy place, quite possibly a fly-by-night operation. The Vintage House opposite still had its amazing stock of spirits including a bottle of brandy that could have witnessed Waterloo (the battle, that is).

Saturday evening arrived and the usual plague of bemused out-of-towners descended on the West End, mixing with tourists. The restaurants filled, the post-football match crowd downed pints in Covent Garden and London braced itself once again.

More was crammed into the visit: northwards and back on the Tube to Kentish Town and Islington with the tricks and shortcuts to get you out the station that little bit quicker. Then south again for the obligatory curry with old friends who were there for life’s rites of passage decades ago: first pint in a pub, classic gigs at the Marquee club, punch-ups, arrests and more.

Finally, a crisp walk across Greenwich Park and onto the Docklands Light Railway for the airport; it’s all so simple and quick nowadays, despite having an airport body scan and the contents of a rucksack rummaged through (man, those socks stank).

Within no time the streets of London became roads lined with olive, almond and citrus trees. The new orange blossom sent perfume into the air, caressed into action by warm, gentle rain. Home had arrived.

5 thoughts on “A visit to a past life”