Today, a few streets away from the busy weekly market, we sat on a bench like children bunking off school*. No cigarettes, sticking chewing gum to the bench or illicit snogging; just a pile of churros wrapped up in paper on a beautiful, blue-sky day. [Update Sept 2017: now a kebab place.]

There’s a spot in most towns where the traffic and general hubbub disappear, leaving just the birds and the breeze. Our chosen hideaway was the 16th century Ermita de San Sebastian which we pass on our walk to Bayacas.

This churro place at the top of town on the way to the cemetery (helping people get there it seems) opened this summer and also sells ice-creams and big bottles of Alhambra lager, obviously. Importantly, it includes chocolate sauce which, like chilli sauce and double onions on a doner kebab, is vital, otherwise churros can get boring after a few mouthfuls. There are two other churro places in Órgiva; one opposite the church, which doesn’t always do the sauce and the other in the covered market off Plaza Alpujarra, which we don’t think does it at all. 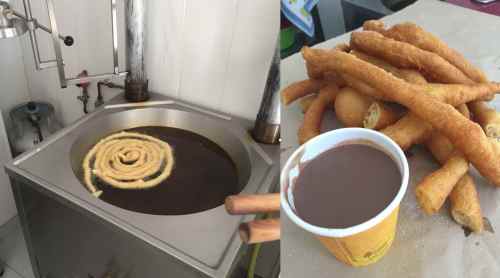 As the churro machine’s steel sphincter pushed the metre-long tapeworm out, we licked our lips in anticipation;  this morning wasn’t for freshly-squeezed juice and a bowl of oats. We haven’t had to eat anything else all day. Truth be told, they were not as good as the ones we have in the Alhambra Cafetería in Bib Rambla, Granada.

There seems to be a few new places opening in Órgiva, which is a good sign.

* M was once expert at bunking off school; on one occasion he was caught by his Mum wandering around his local high street with a girlfriend and on another missed a detention and went, instead, to see the band Rush at London’s (then) Hammersmith Odeon. Next day he was ordered by the headmaster to cut off his long hair, which the girlfriend duly did using blunt scissors.