A walk to Sacromonte, Granada

In brutal August heat with our backs as wet as newly-caught mackerel, we followed our noses to the area in Granada known as Sacromonte (‘sacred mount’). For every ten visitors to neighbouring Albaicín, one visits this area, it seemed to us anyway.

High up, both have views that leave you – well – in awe of the city. The distant, bobbing heads of tourists at the Alhambra’s Torre de la Vela made us realise just how far we had walked from the bustling Plaza Nueva where mini-buses leave to take tired legs up to these two districts.

Fortified by a Cola Callipo, we took a wrong turn or two – once almost entering a family’s noisy home – before arriving at the Museo Cuevas del Sacromonte, our first taste of the history of the caves (there are over 200 of them). 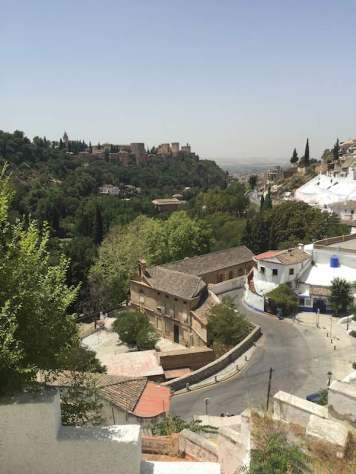 Looking towards the Alhambra from Sacromonte

The caves were cool as fridges – and we were drawn like magnets. Each is themed to give a taste of what it was like to live in one. Look! – there’s an iron bed, and woven baskets, a battered guitar – you get the picture. The caves were often in three sections with the bedroom at the back and kitchen at the front for ventilation.

Sacromonte is located in the valley of Valparaiso and traditionally associated with Roma people (gitanos). It’s believed the caves were mainly formed in the 15th century around the time of the Catholic conquest of Granada. Muslims – and Jews – were forced out of the city’s centre and gathered on the outskirts, away from the city’s jurisdiction, to make the area their home. At the time, and over the following decades, Roma people arrived and also settled here. More on the caves’ history another time.

Cave dweller from many moons ago

The best way to explore the area is probably to head up high. Having already lost 80% of our body fluids on arrival and feeling like we we’d been placed in a pizza oven, mooching about for too long wasn’t on.

Today, many caves have been modernised to the extent they have security gates and Wi-Fi. It was only fifty or so years ago that the area was run-down; not the tourist destination it now is. Today, as well as being a permanent home to many, artists and travellers arrive to stay in the caves. It’s possible to rent a cave (check out airbnb etc). 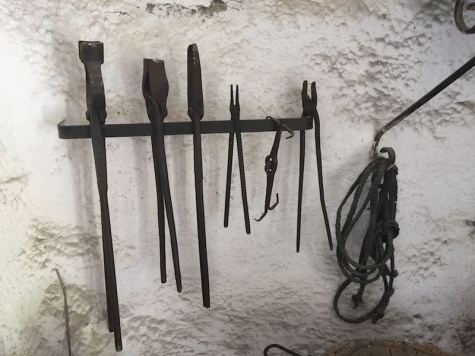 There are regular performances of flamenco in the area, mainly aimed at tourists. But as an important part of Granada’s culture and music, they no doubt give some insight into Sacromonte’s past. The mix of Moorish and Roma culture over the centuries gave birth to a particular form of flamenco – the Zambra.

We headed back down to the cauldron of Granada’s Gran Vía finding ourselves at Heladería los Italianos where we enjoyed the most welcome  ice-cream, ever.

This old film of the area shows how it was. Stick with it – especially to watch the adorable children practising their dancing (at 07:00). Again, more on the caves (and Zambra) another day.

Tip: if you don’t want to walk, catch bus C2 from Plaza Nueva or Gran Vía. The museum is open every day 10am to 8pm, mid-March to mid-October (but closes at 6pm all other months). 5€ entry.

Finally, check out this website which has some interesting pictures of modern-day cave dwellers. The photographs are far better than any we could ever take.

This year’s bonkers heat and humidity continues; still, it gives us an excuse to buy multiple packs of ice-pops.

‘When the Moors ruled Europe’ documentary

8 thoughts on “A walk to Sacromonte, Granada”