Heading east along the coast from Motril, the greenhouses around Almería sweep right to the seashore giving the impression you might be driving through a winter-wonderland rather than the driest place in Europe.

More than half of Europe’s fresh fruit and vegetables are grown in these vast greenhouses which cover an area the size of the Isle of Wight. They reflect so much sunlight back into the atmosphere that they are, reputedly, cooling the province of Almeria – a bit of reverse global warming on the south east tip of Spain.

Our destination is Cabo de Gata-Níjar Natural Park which protects a wild, isolated, coastal landscape with over 30 coves and sandy beaches. 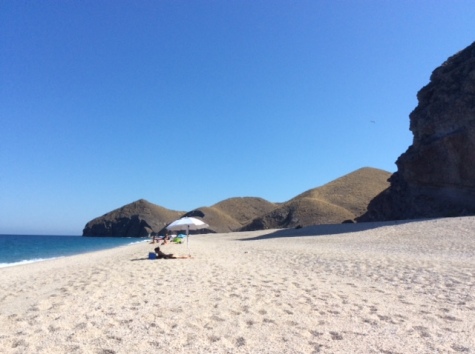 Agua Amarga (‘bitter water’ so named after the town’s wells were once contaminated by mining chemicals) is our first stop. It’s a picture-postcard seaside village; all whitewashed houses with blue shutters and a pretty central square with seafood restaurants and an ice-cream shop. This is where well-heeled Spaniards come to get away from it all.

After a lunch of fresh squid, we head towards the town at the very end of the line, Carboneras, stopping on the way at Playa de los Muertos, a ten minute walk from the road. The ‘Beach of the Dead’ was named after the bodies of shipwrecked sailors that were frequently brought here by converging currents.

The Town Hall in Carboneras

The beach is wide and sweeping – there are no bars or ice-cream shops here – this is hardcore beach life where bikinis are optional. A gigantic cement factory sits majestically at one end of the beach – its industrial starkness adds to the feeling that you are somehow at the end of the world rather than the blight that it might be on another coastline.

Speaking about large industrial buildings, Carboneras is home to a sea water desalination plant, once the largest in Europe – and one of the largest in the world. It supplies irrigation water to the greenhouses, plumping up those supermarket tomatoes you enjoy – well, possibly.

Carboneras is a large seaside town with a beautiful sandy beach and promenade, where three generations of a family enjoy the simple holiday pleasures of sun bathing, swimming and ice-cream. The old town boasts a restored sixteenth century castle and casino-like pink town hall. Somehow you feel you have stepped back into the 1950s.

The following morning we head back to Agua Amarga and to the remote Cala Enmedio beach – a fabulous 25 minute walk high along the coast. You can see for miles and miles and miles – in fact, the whole area’s dry and harsh conditions have meant it’s never been built up – it remains largely unspoilt and beautiful.

After a spot of sunbathing we hopped in the car and two hours later were back in equally-beautiful Las Alpujarras. Chalk and cheese – but that’s what is so wonderful about this part of Spain. Most people who come to Andalucía head for Seville, Ronda and so on – but be sure to make time for this too.

A day by the sea – La Herradura and Salobreña