Playa Granada isn´t some tacky, man-made attraction in the suburbs of Granada city – it´s a real beach – yay! – and a huge one at that. Mainly stoney with some areas of sand and a golf course hugging its boundaries, we were taken by surprise at the sheer expanse of a great place to chill on our doorstep (35 minutes from Órgiva), not that either of us are beach bums.

Having spent time in Salobreña and La Herradura, Playa Granada – which has Motril´s port as a neighbour – reminded us of beaches in Barbados, being surrounded by lush vegetation; banana plants, sugar cane and a kaleidoscope of kumquats and avocados.

Turn your back to the sea and a golf club dominates the area, snaking around holiday apartments which, to be fair, are largely attractive with immaculate grounds and gardens (had we stepped out onto the course, someone would have ended up with a wayward ball to the temple and fallen off their balcony onto the bougainvillea below). On the other end of the scale there´s a campsite, perfectly placed. We noted that campers can order their own fresh bread each day; how times have changed.

If water sports are your thing it´s possible to hire kayaks, dinghies and surf boards – with expert instruction if required. Just head for the beach in front of the golf club (which is a pleasant spot for a drink and to peruse the pink and turquoise golf attire).

First hole of the day

Various bars and restaurants pop up along the beach which no doubt get rammed in the summer with young and old escaping Granada´s heat for the day. Behind the beach there are more upmarket places offering fish dishes for around €15 a pop. 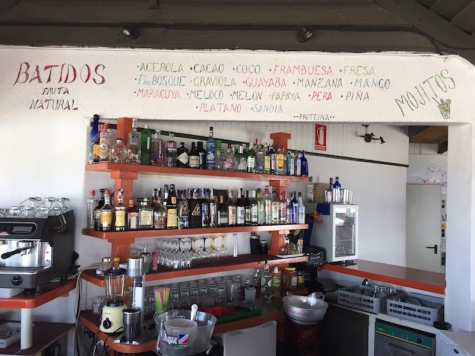 More shakes than you can shake a stick at

We really enjoyed our morning at Playa Granada; milk shakes, blue skies – and looking between the beach bums for Africa over the horizon.

To the coast again: Almuñécar

A day by the sea – La Herradura and Salobreña