All posts, Photography, Stuff we find

In the 1970s, a family friend (of M’s) posted various bits ‘n bobs to him about R.M.S. Queen Mary – the ‘Quadruple-Screw Turbine Steamer’ that sailed the North Atlantic from 1934 to 1967 for the Cunard White Star Line (as it was at the time). The ship is now permanently moored at Long Beach, California.

The lady in question – Ms Puddifoot of London, NW5 – had travelled from Southampton to New York and back in the summer of 1939. What she passed on is a treasure trove of original documents – menus, ship plans, postcards; plus an accompanying letter in black ink, all of which M has to this day.

In her letter she says: ‘Tell your Mum and Dad I expect their mouths will water when they read the menus.‘ She also included a map so that ‘you can trace where your Dad goes when he travels the world.’

The Queen Mary’s capacity was 2,139 passengers: 776 first class, 784 tourist class and 579 third class. Ms Puddifoot was a tourist class passenger and had to make do with Bluefish Belle Meunière and Cold Split Lobster. What a thrill it must have been seeing New York appear in the distance from the deck. The Empire State Building would have been only eight years old, not far from where the ship docked at Pier 90 on the Hudson River.

Here are some of the things she sent to a young boy sitting in his bedroom, a long way from the sea.

Sailing times: Note Ms Puddifoot’s pen mark against the day she set off from New York – Wednesday 23 August 1939. Had Ms Puddifoot chosen the next timetabled voyage from Southampton, she would have shared the journey with comedian Bob Hope – and an awful lot of gold bullion. That sailing, dated 30 August, was to be the ship’s last peacetime voyage before the outbreak of World War 2 where she was used to carry troops. So the timetable below, for public passengers at least, was unfulfilled. 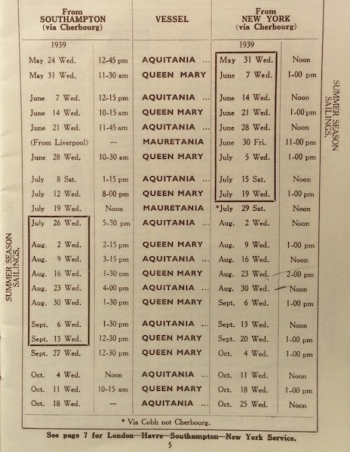 A piece of the Alhambra in London