Off to Granada again, we met friend Zainab (see her fabulous post about horse riding in Las Alpujarras) on a day that reached 37 degrees – ‘not that hot’ we were told, in a city known for its oven-like temperatures.

It was Zainab’s suggestion to meet in Plaza Gracia, slightly off the beaten track and home to seafood tapas bar Puesto 43. After traipsing the streets completing various chores and playing ‘spot the nun’ (like graffiti, they’re around every corner) the most welcome Alhambra Especial beer ever was followed by a few simple favourites, calamares (€9), prawn croquetas (€1.50 each) and berenjenas con miel de caña – fried aubergines with honey (€6). 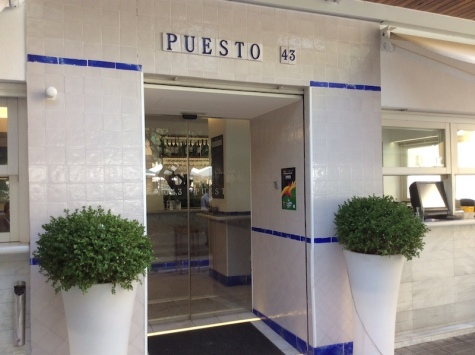 Puesto 43 is like eating in a fishmonger, with its pristine tiles of white and azul, only without the melting ice and buckets of fish innards. The clientele is local and slightly upmarket (we let the side down), the menu unfussy but superb and everything is as fresh as can be. The daily catch is brought up from Motril, a 30 minute drive from Órgiva.

The same family – the first fish wholesalers in Granada dating back to 1904 – run the place and it’s an oasis of cool and calm – despite the volume of some of the discussions at nearby tables.

Granada is full of good places to eat and we’re certainly now fans of this place. It’s worth seeking out.

[Note: like all our reviews, we are independent and have no relationship with any establishment. Just honest reviews with NO sucking up in return for something.]

Órgiva to Granada by bus