Reading all about it – in Órgiva

Some people can’t do without their daily newspaper (or Cornflakes or Earl Grey tea for that matter) and here in Órgiva it’s easy to get hold of most of the UK ones. There are two places to find out about vacuum cleaners, student A-level results and 3rd Division football scores: a booth next to the church and a Tabac near Dia supermarket. You can reserve a paper each day – useful if you’re on holiday for a week or two. We’ve never bought a paper, instead we go online to catch up on the news in places with Wi-Fi.

In cities like Granada you’ll easily find a booth lurking in the shade of a tree selling a gigantic array of publications from The Irish Times and Die Welt to Le Figaro and Hello! magazine.

Back to Órgiva; pop into El Viejo Molino most mornings and you’ll see long-established ex-pats reading all about the ‘shocking’ UK immigration statistics in the Daily Mail (they should all be sent home, these ex-pats). Interestingly, we’ve yet to come across The Guardian or Observer, so it seems Órgiva isn’t exactly a hotbed of left-wing activism. Here it’s The Daily Telegraph, Times, Daily Mail and Daily Express (was that Princess Diana we just spotted in the bakers?) that make up the bulk of the papers, although there’s normally a decent pile of Daily Mirrors. 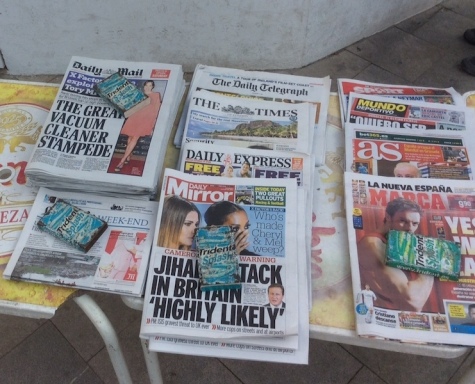 It’s no surprise there’s a range of Spanish papers as well. We wondered how long they’ve been established, so here goes:

El Pais: ‘The Country‘ – founded in 1976, six months after the death of Franco. It’s the largest printed daily newspaper (c.370,000 circulation). Headquarters in Madrid but different editions are printed in, for example, Barcelona and Seville. Wikipedia states the paper’s ideology ‘has always been defined by a leaning towards Europeanism. Politically, it was situated in the centre-left in the past, but currently it is situated in conservative positions.’

El Mundo: ‘The World‘ – founded in 1989 and the second largest printed daily newspaper (c.266,000 circulation). Headquarters in Madrid but different editions are printed in, for example, Andalucia and Valencia. Wikipedia states it ‘expresses the mainstream views of the Spanish right with independent and liberal overtones.’

ABC: Founded in 1903 and the third largest printed daily newspaper (c.243,000 circulation). Headquarters in Madrid (the oldest in operation in the city), it generally supports conservative political views. Wikipedia states that in 2009, ABC made its complete archives available online, giving modern readers a chance to see contemporaneous news about the Spanish Civil War or Franco’s death.’

La Razón: ‘Reason’ – Founded in 1998 and the sixth largest printed daily newspaper (c. 110,000 circulation). It has local editions in Barcelona and Seville among other places. Wikipedia states that ‘the newspaper’s editorial stances are primarily liberal economically and conservative socially.’

Ideal: Founded in 1932, this is a more ‘local’ newspaper with editions in Granada, Jaén and Almería. We see quite a few people reading this but don’t know much about it.

There are several others, including papers devoted to sport.

Similar to the UK, papers have come and gone over the years – the most recent, high-profile demise (of the printed version) was Público, a left-wing publication, now available online.

There are also English-language newspapers available but we prefer to occasionally read the English version of El País as our Spanish isn’t up to much (but reading a newspaper is a good way to learn the language).

Wi-Fi and internet guide to Órgiva

2 thoughts on “Reading all about it – in Órgiva”