All posts, Órgiva and environs, Nature, walks and wildlife

Over the years, people have planted palm trees in places they want them to be seen; by swimming pools, grand entrances, ornamental gardens and so on. So the effect is somewhat diminished when they begin to wilt and die before your eyes – and it’s nearly always too late to do anything about it.

The weevils’ destructive gap year began in Asia, headed for Africa and Europe – and eventually arrived in the Mediterranean in the 1980s. Unfortunately, they didn’t return home to their parents after 12 months.

Almuñecar – a 45-minute drive from Órgiva – saw the first infestation, killing some Phoenix canariensis. It’s believed that the weevils were first introduced to Spain via trees imported from Egypt, a large exporter of palm trees.

In the mid-90s, the importing of palm trees from countries where infection had been recorded, was banned – and controlling the pest has been a nightmare ever since. Like a locust, once the weevil runs out of food, it simply moves on to the next fly-in palm tree restaurant.

There was once a large tree in Órgiva near the children’s playground. It met its end about a year ago.

The larvae mainly cause the damage. An adult can lay about 200 eggs at the base of sprouting leaves or in ‘wounds’ to the trunk. The larvae, which can reach 5cm, feed on the soft fibres and tunnelling into the tree’s interior.

This week, as two men chain-sawed a tree, dumping huge cheese-wedges of it over a fence, we saw a larva for the first time – 1970s Doctor Who meets the grub-eating revulsion of I’m a Celebrity…Get Me Out of Here! .

The larvae are a delicacy in Southeast Asia, especially in Malaysia where they’re known as Sago Delight.

We took a photograph of a larva as the men hacked away at the sad-looking stump. It came out blurred so instead, from Wikipedia…we think the weevil looks like one of the Clangers, wearing an oversized cape. 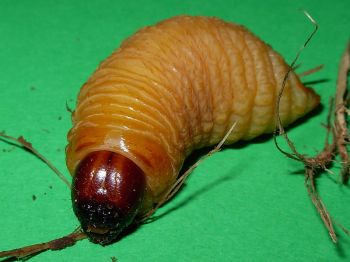 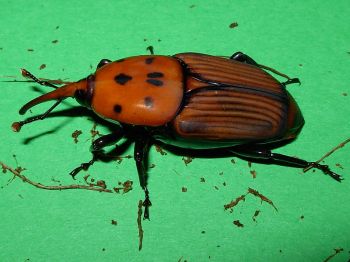 5 thoughts on “The weevil dead”