Sopa de castañas y chorizo – get your nuts out…

On our recent walk from Pampaneira to Bubión we collected fallen chestnuts and apples. Back home, we made delicious chestnut and chorizo soup, followed by apple crumble.

The chestnuts were prepared by scoring a cross in each one (to stop them exploding), adding them to boiling water and simmering for 25 minutes. The softened shell and inner skin were removed while still warm. There must be some knack that we hadn’t got the hang of as we ended up with a crumbly pile of chestnuts. Zero marks for technique, but we did have something to work with. 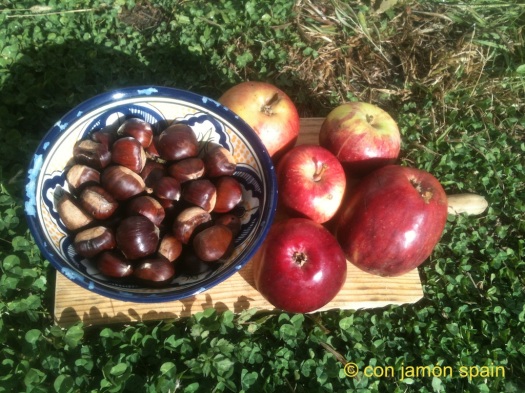 We loosely followed an online recipe from The Moro Cookbook by Sam and Sam Clark. Their restaurant in London has this on the Christmas menu. Here’s the recipe for two people:

In Lanjarón, the chestnut is celebrated each year on 1st November. No doubt a version of this dish is served up.

For pudding we made apple crumble. It’s a lazy version of apple pie – the crumble being ‘almost-made’ pastry without the faffing around. We added some chestnuts to it, although you could add almonds or hazelnuts.

Considering snow has settled on the Sierra de Lújar, these two dishes are perfect to eat by the fire. And we haven’t even begun roasting chestnuts…

Sopa de castañas y chorizo – get your nuts out…