Pampaneira: traveller, come live with us

We suspect Pampaneira gets a little overlooked in favour of the other ‘white villages’ of Las Alpujarras – like Bubión and Capileira. Maybe because it’s the first you come to after leaving Órgiva – a snaking 25 minute drive – and people may have an urge to head higher. But we like it and it’s worth stopping here.

Pampaneira is a bit touristy but escape the main square, with its mix of locals, hikers and cyclists, and head to the higher part of town. Here you get rewarded with tiny, deserted streets and marvellous views of the Poqueira gorge on which these villages cling to like limpets.

A highlight is the old stone washroom where people once took their clothes to be cleaned in the mountain water which pours out of myriad taps throughout villages like this. It has to be the best place in the world to remove those stubborn stains.

Stumbling across a carpenter with his ‘workshop’ outside his front door is a joy. Cats slink down the alleys as dogs guard their little empires of cool stone and shade. About 300 people live here.

A nearby house has so many flowers and plants tumbling from its windows, it seems like an entry for the Chelsea Flower Show. And like all the white villages there’s a church (always locked), a square and dozens of flat-roofed houses, typical of the Moorish style in Las Alpujarras.

A quiet street in Pampaneira…oh…

And it’s stuff like this that makes these villages so popular. Coach-loads of people arrive each day, tempted by the rugs, carved walking sticks and trinkets for sale. We counted about 15 places to eat, most offering a menú del día (note sometimes without a drink as part of the deal).

Opposite the 16th century church on Plaza de la Libertad there’s a good tourist centre explaining everything from how snow falls on the Sierra Nevada, local wildlife to mining activity. There’s also some decent original art for sale. The staff can advise on trekking, horse-riding and where to stay and there are plenty of maps and equipment if you need it. [Tip: AVOID the café in this square with outside tables, they ripped-off friends of ours.]

Osel Ling, a Tibetan Buddhist monastery, is 2km away (more on it another time).

For a drink and food we found Bodega La Moralea on Calle Verónica. To find it, come out of the tourist centre with the church in front of you, bear right and head down a narrow street with an acequia running in the middle. You may have to pass a gigantic, fluffy white dog, seemingly plucked from a Disney film.

For €9 we enjoyed three drinks each (small glasses of wine) and some fabulous jamón, chorizo and cheese with herbs. Tour party leaders down a free drink at the counter – a ‘thank you’ for directing people to the place. It’s the same all over the world.

We got chatting to a film crew from TV Alhijrah – a network in Malaysia – who were making a 13-part documentary on the Muslim legacy in North Africa and Spain. To our disappointment we weren’t interviewed, despite combing our hair shortly beforehand. But at least WE filmed a dog scraping his meat and two veg down the street (see below).

It’s good to get to Pampaneira early (before 10am) before it gets busy – although it will be in the shade before the sun slowly bathes the village in gold and warms the air.

Oh, the ‘Traveller come live with us’ is taken from the welcoming sign as you enter the town.

Typical Moorish roofs and chimneys (and someone’s bum sticking out)

Probably made nowhere near the Poqueira gorge 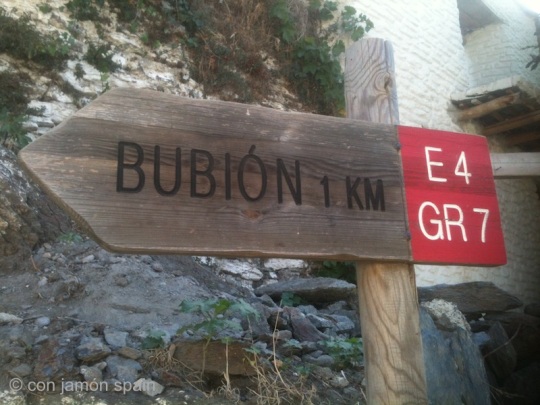 Bubión is 1km from Pampaneira (not on the GR8)

Images of Pampaneira on Google.

An autumn walk, a loom and a dog bite

2 thoughts on “Pampaneira: traveller, come live with us”