You look great for your age…olive tree

1513: Imagine the year. As the shoot of this olive tree (below) first poked its head out of the dry soil, there was some corner of a foreign field which saw James IV killed at the Battle of Flodden – Juan Ponce de León discover Florida, Vasco Núñez de Balboa, the first European to see the Pacific Ocean and, in Ireland… well maybe not much happened.

Of course, we don’t know exactly when this tree said hello to the world but have a rough idea thanks to those people who take the time to find these things out.

As it says here:…’the olive tree (Olea europaea) is an evergreen tree belonging to the family Oleaceae. It originated from the wild olive tree (O. europaea var. sylvestris), which was cultivated in Palestine around 6000 years ago. It was later spread westwards throughout the Mediterranean by the Phoenicians, the Etruscans, the Greeks and the Romans. It is believed that the cultivation of olive trees arrived in the Iberian Peninsula during the second millennium BC.’

Spain is full of olive trees – it’s by far the biggest producer of olive oil, way beyond Italy and Greece, producing around 44% of the world’s olive oil – and two-thirds of it comes from our neck of the woods, in Andalucía. A cheap, local oil tastes good – and that’s what we pour on our tomatoes.

The trees in our garden are harvested by a man who was born in a building that’s still on the land. We could ask him his age but, guessing it to be around 65, he’d have been a child when they were planted. They are young trees and currently (September) have hard, bitter green olives.

We think the massively-wide olive tree we mention in this post is two metres wide at least, making it around 500 years old.

The tree in our photo – just over the Rio Chico from us– is getting on for the same age. It’s a beast that’s stood firm while other things have come and gone around it. 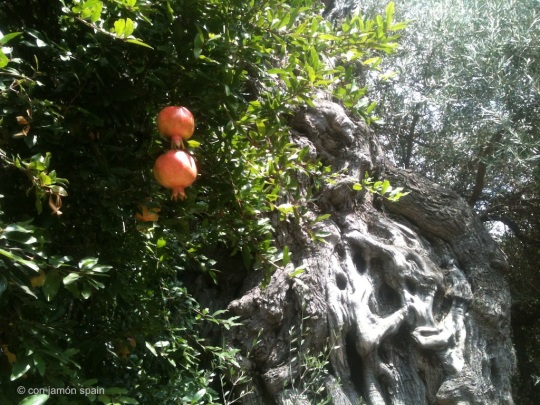 Quiet at the back! – today’s chemistry lesson

Eucalyptus trees in the rain (photo)

Oranges are not the only fruit