All posts, Órgiva and environs, Nature, walks and wildlife

Learning about the area – Órgiva 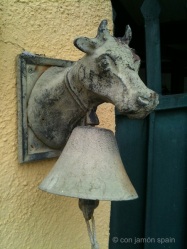 We’ve met a few people in and around town. OK, they’re Brits but with our limited Spanish it’s impossible to have a meaningful conversation with a local – for a while at least. One chap we met – let’s call him Frank – has been here eleven years. He’s not been the first person to tell us that 39 degrees is fine but just wait a few more weeks. A few years ago he could barely leave the house because of the heat.

The Sierra Nevada mountains still have some snow on their peaks. Looking at them while dripping in sweat is bizarre. We’re told that it’s unusual for there to be snow this time of year – but that’s a good thing as the melting snow will feed the lower land throughout the summer. Having said that, the Rio Chico has now dried up, exposing previously-submerged objects, like shoes and tin cans (back home, it’s shopping trolleys and bicycles). 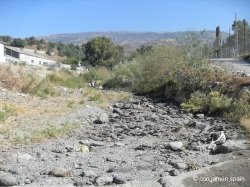 Frank also told us more about the mountains. Mulhacén, Spain’s highest at 3,480 metres, dominates the Sierra Nevada, although it’s hidden from view from where we are by another mountain. Water from it, which hasn’t seen the light of day since it left, pops up in a spring near our casita. The pressure of the water is such that at another nearby spring higher than us on a plateau, water gushes out.

Órgiva itself, while in a valley, is already at a 450 metre elevation and the Sierra de Lújar – which each evening as the sun sets briefly turns a breathtaking furnace orange – is 1,878 metres. If you look closely you can see tiny white house and various masts.

Apparently it’s a good four or five hour walk to the top – not something to be done in the heat of the day. It’s famous for mining (mainly lead and fluorite) and Frank said it had started again in the last year. Hunting for wild boar also takes place. This hiking website explains more and has some interesting pictures. It says you can find entrances to mines and go exploring.

A lovely family we met gave their take on the area; how it had changed over recent years (‘they’ve spent money on a swimming pool and football pitch’) and the local hippies. Hippies, it seem, divide opinion.

It’s interesting to hear how abandoned farm buildings were bought and transformed into magical homes with views to die for, and how local people (including one who grew up on the land) – are employed to look after gardens and gather olives.

The people we’ve met all seem very happy with their ‘new’ lives. In London they say people don’t even know their neighbours, here everybody knows each other, or at least they know who the person is. Is that a good, or bad, thing we wonder?

We want to plan a few walks but perhaps not the Sierra de Lújar trek until we’re fitter, or stone or two lighter. But we walk each day and marvel at just how beautiful it is here.

And we’re having more cold showers.

Smoke got in our eyes

An autumn walk, a loom and a dog bite

Washing of the water