Órgiva’s church – La Iglesia de Nuestra Señora de la Expectación – dominates the town. It’s impossible to miss. To our untrained eye it looks more modern than it is. It’s unusual looking and painted in a beige/yellow colour, common in Spain.

There’s little on the web about the church and certainly no one on hand to explain its history – the church is rarely open (as is la oficina de turismo).

We’ve seen the occasional gathering outside (unsurprisingly on a Sunday) and a funeral.

As it says on the plaque outside the church: “It has three naves and a central semi-spherical dome on pendentives. In the 18th century the impressive twin towers were erected, which flank the main facade with very sharp slate spires, octagonal ground plan and a great aesthetics, symbolic and town planning beauty.”

Here’s a one-minute recording we made of the beautiful bells. Half-way through the cacophony increases as the large chiming bell joins in.

More from the plaque: “The church has polychrome sculptures from the school of Granada from the 17th century, excellent ‘divine portraits’ from Jose Risueno, a disciple of the artist from Granada, Alonso Cano,

The church is of Renaissance style and Greco-Roman type, with half barrel vaults and semicircular arches. The altarpiece in the Main Altar belongs to Charriguera Baroque style,

The Saint Expiring Christ (Santísimo Cristo de la Expiración) is worshiped in the church. The cedar wood sculpture is from the school of Juan Martínez Montañés.” 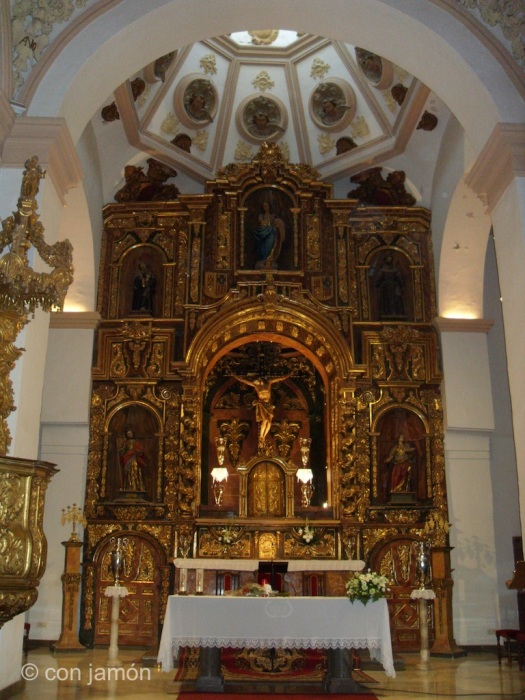