Valencia has its own in the heart of the city whereas Málaga’s is a fair way outside it. El Jardín Botánico-Histórico la Concepción is a Málaga must-do and a relaxing way to while away a few hours. Get there early and it could be the closest you get to being lost in a tropical forest…with signposts. Even late morning we only came across six other people.

The estate has several routes and themed gardens with specific plant groups. There are orchids, magnolias, cacti, bamboos, cedars, casuarinas and very old – and huge tress – the list goes on.

You’re encouraged to start at the historical garden where the ‘Jewels of La Concepcion’ are displayed – and, if you like fountains, footbridges and waterfalls, there are loads of them. Nymph statues too. 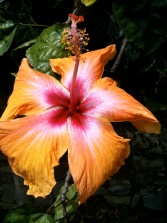 In the 1850s, aristocrats Jorge Loring Oyarzábal and Amelia Heredia Livermore (granddaughter of the British Consul) designed the gardens which became famous for their collection of archaeological remains as much as the gardens themselves. This included the bronze Lex Flavia Malacitana which details the Roman laws that governed Málaga in 80 AD. It’s now in the National Archaeology Museum in Madrid.

Following their deaths at the turn of the century, the place was bought by the Echevarria-Echevarrietas in 1911 who extended the gardens. In 1990 Málaga City Council bought the estate and the next year the Municipal Botanical Trust was founded to run it. It opened to the public in 1994.

As well as 5000 tropical plants, the estate has several structures like the stately home (see short film below), the cypress house, a schoolhouse, iron greenhouses and a long arbour.

The gardens are open every day except Mondays from 9.30am and entry costs about €5 (adult) and €3 (child). From the centre, the 20 minute bus ride is an interesting way to see the city’s northern suburbs.

For horticulturists and botanists, here’s the longest list of species we’ve ever seen (PDF, 300KB).