On holiday we’re never quite sure if places we end up are aimed at tourists or where the locals go  – or a bit of both (and don’t they say a restaurant full of locals, no matter how dour or unexciting a place looks, is the place to eat?). Guidebooks can help point the culinary way and, in our experience, normally get it right.

El Pimpi – sited in an 18th century winehouse (bodega) – is in the heart of Málaga and seems to fall in the tourist/locals camp but that’s probably because it’s a stone’s throw from loads of sightseeing spots – the Roman Theatre and Alcazaba being two. But it’s certainly popular with the locals. 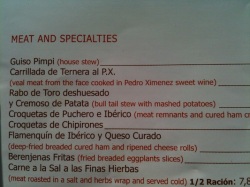 It has two large seating areas plus a dark, cavernous interior (good place to cool down) with walls full of pictures, old posters and millions of photographs.

In fact, there are several bits to El Pimpi all with different characters – the Picasso Loft, Carmen Thyssen Room and the Vine Patio.

We visited several times, sitting outside watching the world go by: Spanish families spanning babes to oldies, American students, workers ending their day with a glass of wine – and people like us, guidebook in hand, planning the next day’s itinerary.

The place is famous for its collection of old wine barrels with famous people’s messages scrawled on them, not that we recognised many of them. You could easily spend an hour just nosing around the building – it’s beautiful, with a thousand red Geraniums.

The name – El Pimpi – refers to men who once helped ships’ crews and passengers as they disembarked. Over time the Pimpis became guides showing people around the city.

It’s a fine place to have a glass of Málaga Virgen and food – even if a little touristy. It’s busy, bustling with attentive staff and is (probably) a bit more expensive than a backstreet bar/restaurant. But we went to loads of those too – and a few were so-so. El Pimpi never is. Recommended.

Here’s an imaginative, if rather frantic, promo film of El Pimpi – on YouTube

All about Granada, Órgiva, La Alpujarras, Las Alpujarras, Andalucia, Spain – tapas, history, local guides and more.
View all posts by con jamón spain »
« To be, or not to be
Stuff we find: A town reborn »