I look for Joe Russell’s grave – ‘Sloppy’ Joe – fisherman, cigar maker and rumrunner. But Key West cemetery is a big place (75,000 bodies) and the white, flaking tombs are mostly above ground due to the high water table. Bodies are buried shallow; some had their whole life at sea and they don’t want to go back. On Cayo Hueso – ’Bone island’ – I’m among the Costas, the Ruis, Pinders and Bethels with not a living soul in sight. 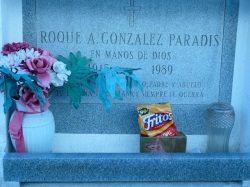 Twisted roots and flowers, you see loved and forgotten names – there are listing headstones, snapped crosses, and an angel with a broken wing. Whole families together again after, perhaps, a lifetime apart. And Key West, with its criss-cross streets, tourists trolleys, blue skies and henna tattoos (don’t stain the sheets), seems to the happiest place on Earth.

It’s less than two hours since I asked the same question: ‘Hi, do you live here or visiting?’ And there can only be one of two responses and with a population of around 30,000 it’s normally the latter. I wonder what it must have been like in 1840 with just 700 people on this island in the middle of nowhere. So you chat about the weather, where you’re staying, the best bars.

May 5th 1937 – Sloppy’s bar opened on Greene Street. The same street where today a tide of people, jettisoned from cruise ships for six hours (it’s always six hours) flood the streets looking for conch fritters and real gold. Dime-sized necklaces beaten from the gold of shipwrecked vessels – ‘I bought it for my wife it’s what she’s always wanted.’

Sloppy moved, his rent went up by a dollar a week so he, his bar and his customers left. Left to go a few yards round the corner. The toilets went too. Even today, the seven-toed cats in Hemingway’s home down Whitehead Street drink from a tiled latrine. If you leave something lying in the road why not take it home? Hemingway figured that as he’d spent enough money in Sloppy’s pouring what he’d bought down it, it was right to claim it as his own – or so the story goes.

I was told I had to meet Captain Tony: ‘Don’t miss the opportunity, not if you’re only here for a few days’. A short man with bags under his eyes so big it seemed someone must have inflated them with a pump. We spoke about places he had visited during his life: ‘England; Southampton; whores!’ – a place my mother had died a few months earlier.

Tony Tarracino the legend, former mayor of Key West – his old bar for 30 years on the site of Sloppy’s original, telling me about port-side girls.

A crusty old man, there was something in the way he spoke that made me put down my beer. All these memories crammed into a puffy, decrepit man in his 80s (he died a year or so later). Someone who’ll forget about me the moment I lay down my dollar tip and leave to walk down Duval Street, leave behind the bar of cast-off underwear, flags from around the world, business cards stapled into the beams and miles of newspaper cuttings about Mayor Tarracino. His time in the limelight framed for eternity in the grime of old Sloppy’s place. But he’s kind, tells me to come back tomorrow to talk about dear old, lovely England. And its whores.

Apart from making it to breakfast there’s no timetable for me to stick to in Key West. But to be sure you get to see the reunited families, the drooping dahlias – and the fact that this place has ghosts aplenty – you need to find your way passed the shuttered houses with their ‘eye brow’ windows and white-washed porches before 5pm. About the moment – at this time of year at least – half the town treks downs to Mallory Square to watch the sun go down. There are hollers and cheers and the sound of a hundred camera shutters. I go back to Duval Street, via Greene passed a giant man made of sea sponges. 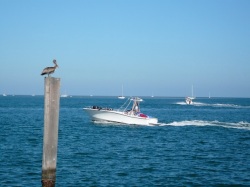 One of the last things I did in London was to copy a map of the Old Town so I didn’t need to carry a book. After one day, maybe two, the town is there in your mind – you can’t get lost. The sun as your guide, the lighthouse, the cruise ships – all there to bring you home. The same Cuban cigar stalls, ‘choking hazard’ T-shirts and homeless people. Tattooed men and women making hats out of palm leaves. The shipwrecked gold, the gold teeth, the gold necklaces.

I’ve never been transported into a film but Denny’s 24-hour diner, well, that’s going to the movies. Denny’s caters for a clientele largely incapable of knowing – or tasting – if the food is good – but it is good. Swiss-cheese burgers, the best fries and – should you want – raspberry shakes. It’s 5am, not 1957, and we’re all part of the same gang, linked-arms and swaying back up Duval as the sun comes up. You can hear music, there’s always music in Key West.

A long day. Searching for Sloppy and talking to the Captain.

It’s not everyday you see someone slowly slicing a slab of Spam. And ‘yes’ – there are also parrots everywhere annoying the crap out of everybody. Except the people who bark ‘hello’ at them in the street – awaiting a response and feeling someone, at least someone, has listened to them that day. 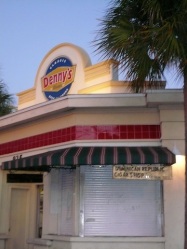 Greg, mad ‘Spam’ Greg and his wife Louisa, shop owner (‘Nobody knows I’m a lesbian’ T-shirts for sale). Key West prides itself in its liberalism. Anything goes I’m told – including eating revolting pink meat in a fan-cooled bar while sinking a dozen Margaritas. And those ‘Snorkel’ masks…with those tubes!

The Spam bar. Mark ‘you have to be happy in your own skin before you get a tattoo’ Mark. He has dark, sprawling blobs of shadows across his skin. Maria – beautiful, Brazilian Maria – and I agree a pact to get one too. We forget that Paradise Tattoo closes at midnight. They understand. A tattoo’s for life, a Brazilian? …some things can be changed in time.

Louisa – the coolest, loveliest person you could meet. Snapping rum-chocolate cigars in two, going out for her one night a week, loving every moment. And there’s Steve, red-faced and angry. He’s from Devon, England and has been in the States 27 years. Hates it. Hiding under the radar, retreating from life he says. Sells jewellery but it’s been slow – the guys at the top of Duval Street – selling gold who welcome the Georgia flotsam – have got it sorted.

Big-breasted Stacy – the all-American girl. She must have been forty feet away from where her ex-husband entered the bar drunk and sweating. Enough time to find the toilets at the back of the bar in the car park – out of sight and out of mind. That’s where people go to be where they shouldn’t. 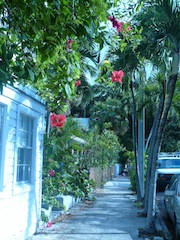 The barman, young and scarred. He saved someone once from a car that had gone into a river. He was awarded $5000 – the local news story he stuck to the post next to the bar.

I listen to Stacey, Mark and Greg, to Louisa and the angry barman with a sort of dreamy puzzlement. We lift our glasses and drink. Hero barman refills our glasses – mixes a drink using a little plastic silhouette of a flamingo, pushing ice around the glass.

There really isn’t a place like Key West. It’s mad, busy, hot – and there’s also a gorgeous calm about the place. Perhaps its history and the mix of everyone that’s lived here since the early settlements around 1822 have made it this place. Steely Dan were right – I can hear the songs from every open window. And everything in Key West is open all the time – except Sloppy Joe’s resting place. I guess some places have to close their doors – just to keep the living out as they tend to spoil things now and again. Don’t understand that even ghosts need time for themselves.

There are no big ships in today and the town’s population shrinks massively. The cockerels in the street, the obscene singer bellowing at passers-by in the street to ‘come on in’ and ‘**** you if you’re from New Jersey!’ – they’re all here, each day – come shine or more shine.

But I’m no longer a visitor, I live here. I live here for five days, walk the streets, passed the shuttered house, by the cemetery. And smile and nod at strangers as if they’re my neighbours.

Meeting new people, different people in mad, beautiful Key West. Home for people who have run away, make hats from palm trees, who visit their Cuban relatives to leave flowers. Eight-foot high angels that wait for next season’s hurricane – and there could be a few years yet to wait. The angels pray to not be lifted by a future roar, to be carried over fences to a new resting place. Someone is smiling on Key West.

In other parts of America people are saving their houses from disappearing down mud-drenched hills, digging their cars out of the snow and hiding from shopping mall massacres. (He was out of control, his girlfriend had left him – he’d been fired from his job. So he shared his despair with others unlucky enough to be on floor 3 of the mall…)

It’s hard to imagine anyone harming someone else in Key West. A drunk man coming at you with a snake perhaps – seeking another dollar for a photo – but no one else.

Locals say it’s not really America it’s the Conch (‘pronounced Conk!’) Republic, closer to Havana than Miami. And yet, on Duval Street with its extra-sized portions, Stars and Stripes (piss-poor) weak beer and loud voices, it IS America.

Doesn’t everyone go home eventually? Someday it may change and Key West – the place no-one could live full-time (‘but visiting is fine!’) could just be that place. At least Sloppy would one day become a neighbour.