It didn’t take long for us to discover the delicious Tortas de Aceite – olive oil biscuits (or wafers, flatbreads, crispy things) – made in and around Seville for over 100 years.

Our first taste of them was at La Casa Grande. In London, we look out for them – they can be found.

It’s easy to eat several at once but they are thin – and fairly healthy, consisting mainly of wheat flour and olive oil (27.7%), with sugar and anise seeds on top. Other versions include sesame and rosemary and thyme.

They come wrapped in wax paper, sometimes a little broken but that’s their charm – cute, delicate and handmade.

The best-known brand is Inés Rosales – named after a woman of the same name who began selling them in the village of Castilleja de la Cuesta in the early 1900s. She built up a great business before dying, aged 42. 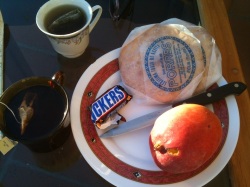 Typical breakfast (for us) – including some Tortas de Aceite